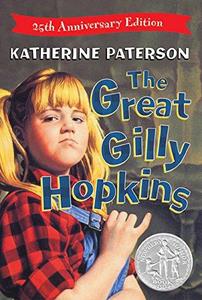 The Great Gilly Hopkins is a realistic children's novel by Katherine Paterson. It was published by Crowell in 1978 and it won the U.S. National Book Award next year. In 2012 it was ranked number 63 among all-time children's novels in a survey published by School Library Journal – the third of three books by Paterson in the top 100.A film adaptation starring Sophie Nélisse as Gilly Hopkins and Kathy Bates as Trotter was released in 2015.The novel has been translated into Catalan, Chinese, Danish, Dutch, Finnish, French, German, Greek, Hungarian, Italian, Japanese, Korean, Lithuanian, Norwegian, Polish, Russian, Slovak, Spanish, and Swedish, and Árpád Göncz’s Hungarian translation has been adapted into a radio play.
Read more or edit on Wikipedia