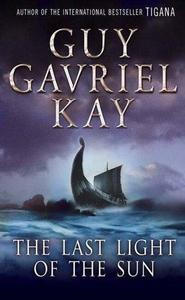 The Last Light of the Sun

The Last Light of the Sun is a 2004 fantasy novel by Canadian writer Guy Gavriel Kay. Like many of his books, it is set in a world that draws heavily upon real times, events, places and people. In this particular book, the period is the Viking invasions of Saxon England. The story concerns a young Erling's attempt to prove himself as a warrior, his father's attempts to make amends for his mistakes, a young prince searching for revenge and a King's attempt to transform his realm into a more civilized one that will resist attacks from the Erlings forever. The books main themes are revenge, violence, the passing of an era, clash of cultures, and love, especially between father and son.
Read more or edit on Wikipedia