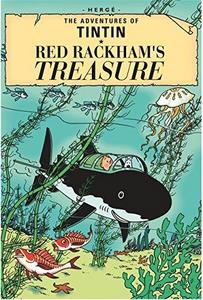 Red Rackham's Treasure (French: Le Trésor de Rackham le Rouge) is the twelfth volume of The Adventures of Tintin, the comics series by Belgian cartoonist Hergé. The story was serialised daily in Le Soir, Belgium's leading francophone newspaper, from February to September 1943 amidst the German occupation of Belgium during World War II. Completing an arc begun in The Secret of the Unicorn, the story tells of young reporter Tintin and his friend Captain Haddock as they launch an expedition to the Caribbean to locate the treasure of the pirate Red Rackham. Red Rackham's Treasure was a commercial success and was published in book form by Casterman the year following its conclusion. Hergé continued The Adventures of Tintin with The Seven Crystal Balls, while the series itself became a defining part of the Franco-Belgian comics tradition. Red Rackham's Treasure has been cited as one of the most important instalments in the series for marking the first appearance of eccentric scientist Cuthbert Calculus, who subsequently became a core character. The story was adapted for the 1957 Belvision animated series Hergé's Adventures of Tintin, the 1991 Ellipse/Nelvana animated series The Adventures of Tintin, the 1992-3 BBC Radio 5 dramatisation of the Adventures, the feature film The Adventures of Tintin: The Secret of the Unicorn (2011) directed by Steven Spielberg, and the film's tie-in video game.
Read more or edit on Wikipedia