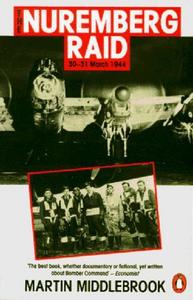 The Nuremberg Raid: 30–31 March 1944 is a book by the British military historian Martin Middlebrook describing the RAF Bomber Command attack on the German city of Nuremberg on the night of 30–31 March 1944. The raid was significant for being the costliest in terms of aircraft losses for RAF Bomber Command in one night attack during the Second World War. During the raid the British lost 96 bombers shot down and a further 10 written-off after landing, making a total of 106 aircraft lost. Nuremberg was not significantly damaged. The raid was Bomber Command's worst night of the war. The RAF lost 545 crewmen that night, more than were lost in the whole of the Battle of Britain. The book provides a general background of the development of the RAF's bombing campaign against Germany up to that date, and provides details on counter measures taken by the Luftwaffe. Many individual accounts of the mission are included, using interviews of the participants from both sides.
Read more or edit on Wikipedia