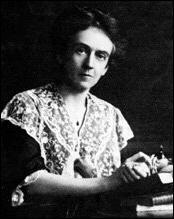 Edith Hamilton (August 12, 1867 – May 31, 1963) was an American educator and internationally known author who was one of the most renowned classicists of her era in the United States. A graduate of Bryn Mawr College, she also studied in Germany at the University of Leipzig and the University of Munich. Hamilton began her career as an educator and head of the Bryn Mawr School, a private college preparatory school for girls in Baltimore, Maryland; however, Hamilton is best known for her essays and best-selling books on ancient Greek and Roman civilizations. Hamilton's second career as an author began after her retirement from the Bryn Mawr School in 1922. She was sixty-two years old when her first book, The Greek Way, was published in 1930. It was an immediate success and a featured selection by the Book-of-the-Month Club in 1957. Hamilton's other notable works include The Roman Way (1932), The Prophets of Israel (1936), Mythology (1942), and The Echo of Greece (1957). Critics have acclaimed Hamilton's books for their lively interpretations of ancient cultures, and she is described as the classical scholar who "brought into clear and brilliant focus the Golden Age of Greek life and thought ... with Homeric power and simplicity in her style of writing". Her works are said to influence modern lives through a "realization of the refuge and strength in the past" to those "in the troubled present." Hamilton's younger sister was Alice Hamilton, an expert in industrial toxicology and the first woman appointed to the faculty of Harvard University.
Read more or edit on Wikipedia