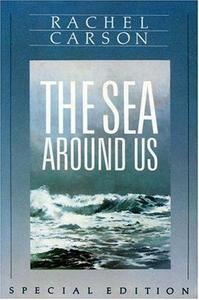 The Sea Around Us

The Sea Around Us is a prize-winning and best-selling book by the American marine biologist Rachel Carson, first published as a whole by Oxford University Press in 1951. It reveals the science and poetry of the sea while ranging from its primeval beginnings to the latest scientific probings. Often described as "poetic," it was Carson's second published book and the one that launched her into the public eye and a second career as a writer and conservationist; in retrospect it is counted the second book of her so-called sea trilogy. The Sea Around Us won both the 1952 National Book Award for Nonfiction and a Burroughs Medal in nature writing. It remained on the New York Times Best Seller List for 86 weeks and it has been translated into 28 languages.
Read more or edit on Wikipedia

original title: The Sea Around Us
language: English
date of publication: 1951
genre: nature writing, non-fiction
main subject: marine biology
follows: Under the Sea Wind
followed by: The Edge of the Sea