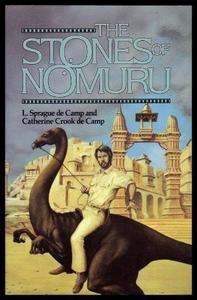 The Stones of Nomuru is a science fiction novel by American writers L. Sprague de Camp and Catherine Crook de Camp, the tenth book in the former's Viagens Interplanetarias series and the first in its subseries of stories set on the fictional planet Kukulkan. It was first published as a trade paperback by Donning/Starblaze Editions in September 1988, and as a mass market paperback by Baen Books in May 1991. An E-book edition was published by Gollancz's SF Gateway imprint on September 29, 2011 as part of a general release of de Camp's works in electronic form. It has also been translated into Italian.
Read more or edit on Wikipedia