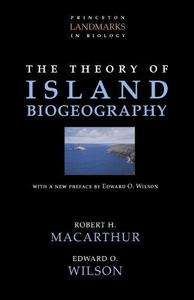 The Theory of Island Biogeography

The Theory of Island Biogeography is a 1967 book by the ecologist Robert MacArthur and the biologist Edward O. Wilson. It is widely regarded as a seminal piece in island biogeography and ecology. The Princeton University Press reprinted the book in 2001 as a part of the "Princeton Landmarks in Biology" series. The book popularized the theory that insular biota maintain a dynamic equilibrium between immigration and extinction rates. The book also popularized the concepts and terminology of r/K selection theory.
Read more or edit on Wikipedia