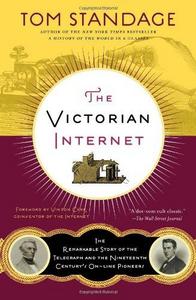 The Victorian Internet: The Remarkable Story of the Telegraph and the Nineteenth Century's On-Line Pioneers is a 1998 book by Tom Standage. The book was first published in September 1998 through Walker & Company and discusses the development and uses of the electric telegraph during the second half of the 19th century and some of the similarities the telegraph shared with the Internet of the late 20th century.The central idea of the book posits that of these two technologies, it was the telegraph that was the more significant, since the ability to communicate globally at all in real-time was a qualitative shift, while the change brought on by the modern Internet was merely a quantitative shift according to Standage, though, by the same token, global communication was just a quantitative shift from long-distance communication.
Read more or edit on Wikipedia