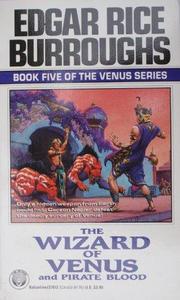 The Wizard of Venus

The Wizard of Venus is a science fiction novella by American writer Edgar Rice Burroughs, as well as the title of a collection in which it was later published together with an unrelated story. "The Wizard of Venus" is the final story in Burroughs's Venus series (sometimes called the "Carson Napier of Venus series"). Written in 1941, the piece remained unpublished until 1964, fourteen years after the author's death. Burroughs intended it to be the opening piece in a sequence of stories to be brought together later in book form, as he had done in the instance of the previous Venus volume, Escape on Venus. He began the first follow-up tale, only to abandon the project in the wake of the Japanese attack on Pearl Harbor; the text of the aborted sequel is now lost. "The Wizard of Venus" was first published in the 1964 Burroughs collection Tales of Three Planets together with the unrelated tales "The Resurrection of Jimber-Jaw", "Beyond the Farthest Star" and "Tangor Returns". Afterwards it appeared in the collection The Wizard of Venus (Ace Books, August 1970). This also included the unrelated pirate adventure "Pirate Blood." A subsequent British edition (New English Library, 1975) omitted the unrelated story.
Read more or edit on Wikipedia