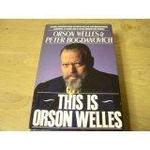 This is Orson Welles

This is Orson Welles is a 1992 book by Orson Welles (1915–1985) and Peter Bogdanovich that comprises conversations between the two filmmakers recorded over several years, beginning in 1969. The wide-ranging volume encompasses Welles's life and his own stage, radio and film work as well as his insights on the work of others. The interview book was transcribed by Bogdanovich after Welles's death, at the request of Welles's longtime companion and professional collaborator, Oja Kodar. In addition to more than 300 pages of interviews, the book includes an annotated chronology of Welles's career; a summary of the alterations made in Welles's 1942 masterpiece, The Magnificent Ambersons; and notes on each chapter by film scholar Jonathan Rosenbaum, who edited the volume. A second edition of This is Orson Welles was published in paperback in 1998, with a new introduction by Bogdanovich and excerpts of a 58-page memo Welles wrote Universal Pictures about the editing of his 1958 film Touch of Evil. The memo was used to create a director's cut of the film released in 1998. The 1992 audiobook version of This is Orson Welles was nominated for a Grammy Award for Best Spoken Word or Non-Musical Album.
Read more or edit on Wikipedia