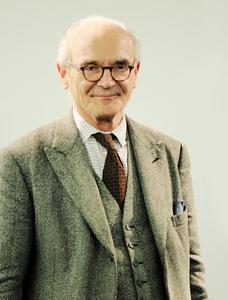 Martin Mosebach (born 31 July 1951 in Frankfurt am Main) is a German writer. He has published novels, stories, and collections of poems, written scripts for several films, opera libretti, theatre and radio plays. His first major non-fiction work is the book The 21 - A Journey into the Land of Coptic Martyrs detailing his visit to Egypt to examine the lives of the 21 Coptic martyrs beheaded by ISIS in 2015.The German Academy for Language and Literature praised him for "combining stylistic splendour with original storytelling that demonstrates a humorous awareness of history." He is a Traditionalist Roman Catholic. Among Mosebach's works translated into English is The Heresy of Formlessness, a collection of essays on the Latin language Tridentine Mass and its replacement by the vernacular Mass of Paul VI, as viewed from the perspective of a Catholic author and intellectual. It has been published in the United States by Ignatius Press. The book argues for a return to the Tridentine Mass, about which the 2007 motu proprio Summorum Pontificum declared that, rather than a "rite", it is a form of the one Roman Rite, stating also that the 1962 Roman Missal, which contained its final form, had never been formally abrogated. Other works include The Turkish Woman, The Tremor, The Long Night and Prince of Mist, in which the author examines the motives behind man's eternal search for a meaning.
Read more or edit on Wikipedia