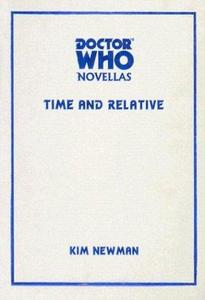 Time and Relative is an original novella written by Kim Newman and based on the long-running British science fiction television series Doctor Who. Set shortly before the first televised Doctor Who story, it features the First Doctor and Susan; their adversary is an entity known as The Cold, which is responsible for the so-called Big Freeze, an unusually harsh winter which caused widespread disruption in the UK. It was released both as a standard edition hardback and a deluxe edition (ISBN 1-903889-03-0) featuring a frontispiece by Bryan Talbot. Both editions have a foreword by Justin Richards.
Read more or edit on Wikipedia

part of the series: Doctor Who
language: English
date of publication: 2001
genre: novella, novel
followed by: Citadel of Dreams