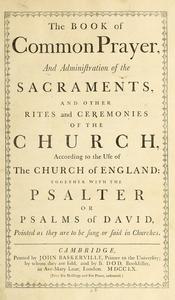 The Book of Common Prayer (BCP) is any of a number of related prayer books used in the Anglican Communion and by other Christian churches historically related to Anglicanism. The original book, published in 1549 in the reign of King Edward VI of England, was a product of the English Reformation following the break with Rome. The work of 1549 was the first prayer book to include the complete forms of service for daily and Sunday worship in English. It contained Morning Prayer, Evening Prayer, the Litany, and Holy Communion and also the occasional services in full: the orders for Baptism, Confirmation, Marriage, "prayers to be said with the sick", and a funeral service. It also set out in full the "propers" (that is the parts of the service which varied week by week or, at times, daily throughout the Church's Year): the introits, collects, and epistle and gospel readings for the Sunday service of Holy Communion. Old Testament and New Testament readings for daily prayer were specified in tabular format as were the Psalms and canticles, mostly biblical, that were provided to be said or sung between the readings.The 1549 book was soon succeeded by a more Reformed revision in 1552 under the same editorial hand, that of Thomas Cranmer, Archbishop of Canterbury. It was used only for a few months, as after Edward VI's death in 1553, his half-sister Mary I restored Roman Catholic worship. Mary died in 1558 and, in 1559, Elizabeth I reintroduced the 1552 book with modifications to make it acceptable to more traditionally minded worshippers and clergy. In 1604, James I ordered some further changes, the most significant being the addition to the Catechism of a section on the Sacraments. Following the tumultuous events surrounding the English Civil War, when the Prayer Book was again abolished, another modest revision was published in 1662. That edition remains the official prayer book of the Church of England, although through the later twentieth century, alternative forms which were technically supplements have largely displaced the Book of Common Prayer for the main Sunday worship of most English parish churches. Various permutations of the Book of Common Prayer with local variations are used in churches within and exterior to the Anglican Communion in over 50 countries and over 150 different languages. In many of these churches, the 1662 prayer book remains authoritative even if other books or patterns have replaced it in regular worship. Traditional English-language Lutheran, Methodist and Presbyterian prayer books have borrowed from the Book of Common Prayer, and the marriage and burial rites have found their way into those of other denominations and into the English language. Like the King James Version of the Bible and the works of Shakespeare, many words and phrases from the Book of Common Prayer have entered common parlance.
Read more or edit on Wikipedia