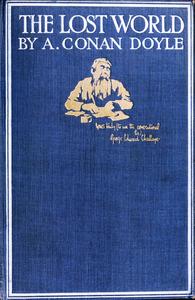 The Lost World is a science fiction novel by British writer Arthur Conan Doyle, published by Hodder & Stoughton in 1912, concerning an expedition to a plateau in the Amazon basin of South America where prehistoric animals still survive. It was originally published serially in the Strand Magazine and illustrated by New-Zealand-born artist Harry Rountree during the months of April–November 1912. The character of Professor Challenger was introduced in this book. The novel also describes a war between indigenous people and a vicious tribe of ape-like creatures.
Read more or edit on Wikipedia