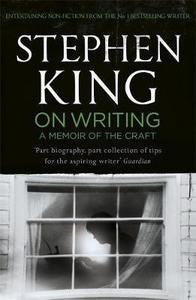 On Writing: A Memoir of the Craft is a memoir by American author Stephen King that describes his experiences as a writer and his advice for aspiring writers. Originally published in 2000 by Charles Scribner's Sons, On Writing is King's first book after he was involved in a car accident a year earlier. In 2010, Scribner republished the memoir as a 10th anniversary edition, which also featured an updated reading list from King. In 2020, Scribner published a 20th anniversary edition that includes contributions from King's sons, Joe Hill and Owen King. On Writing is organized into five sections: "C.V.", in which King highlights events in his life that influenced his writing career; "What Writing Is", in which King urges the reader to take writing seriously; "Toolbox", which discusses English mechanics; "On Writing", in which King details his advice to aspiring writers; and "On Living: A Postscript", in which King describes his van accident and how it affected his life. In 2008, Entertainment Weekly included On Writing on their "The New Classics: Books – The 100 best reads from 1983 to 2008" list. Both Sharon Johnson in The Patriot-News and Julie Woo for the Associated Press, in separate reviews, praised King's advice as "solid". John Mark Eberhart, writing in the Sunday Free Lance-Star, called King's writing advice "pedestrian", but ultimately concluded that On Writing was "a slight but transitionally important work that should lead [King] to better things."
Read more or edit on Wikipedia