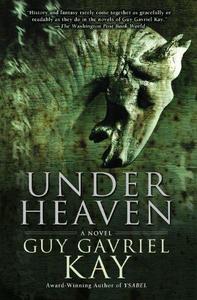 Under Heaven is a fantasy novel by Canadian author Guy Gavriel Kay. It is his eleventh novel and was published in April 2010 by Viking Canada. Set in a fantasied Tang China, it is Kay's first work set outside of a fantasied European or Mediterranean setting. The novel is based on a fictionalized version of the An Shi Rebellion. Under Heaven takes place in a completely new world, as seen by it having only one moon as opposed to the two moons normally present in Guy Gavriel Kay's works. In 2013 he published a second novel, River of Stars, set approximately 400 years later in the same world.
Read more or edit on Wikipedia