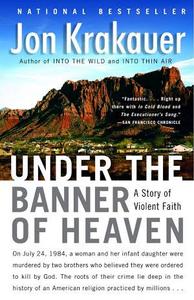 Under the Banner of Heaven

Under the Banner of Heaven: A Story of Violent Faith is a nonfiction book by author Jon Krakauer, first published in July 2003. He investigated and juxtaposed two histories: the origin and evolution of the Fundamental Church of Jesus Christ of Latter-day Saints (FLDS Church) and a modern double murder committed in the name of God by brothers Ron and Dan Lafferty, who subscribed to a fundamentalist version of Mormonism. The Laffertys were formerly members of a very small splinter group called the School of Prophets, led by Robert C. Crossfield (also known by his prophet name Onias). The group accepts many beliefs of the original LDS church at the time when it ceased the practice of polygamy in the 1890s, but it does not identify with those who call themselves fundamentalist Mormons. The book examines the ideologies of both the LDS Church and the fundamentalist Mormon polygamous groups, such as the Fundamentalist Church of Jesus Christ of Latter-Day Saints (FLDS Church). The book was adapted as a limited series of the same name that began airing in April 2022 on FX on Hulu.
Read more or edit on Wikipedia