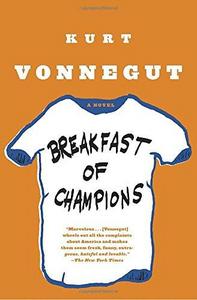 Breakfast of Champions, or Goodbye Blue Monday is a 1973 novel by the American author Kurt Vonnegut. His seventh novel, it is set predominantly in the fictional town of Midland City, Ohio and focuses on two characters: Dwayne Hoover, a Midland resident, Pontiac dealer and affluent figure in the city and Kilgore Trout, a widely published but mostly unknown science fiction author. Breakfast of Champions has themes of free will, suicide, and race relations among others.
Read more or edit on Wikipedia