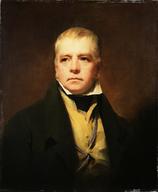 Sir Walter Scott, 1st Baronet (15 August 1771 – 21 September 1832), was a Scottish novelist, poet, playwright and historian. Many of his works remain classics of European and Scottish literature, notably the novels Ivanhoe, Rob Roy, Waverley, Old Mortality, The Heart of Mid-Lothian and The Bride of Lammermoor, and the narrative poems The Lady of the Lake and Marmion. He had a major impact on European and American literature. As an advocate, judge and legal administrator by profession, he combined writing and editing with daily work as Clerk of Session and Sheriff-Depute of Selkirkshire. He was prominent in Edinburgh's Tory establishment, active in the Highland Society, long a president of the Royal Society of Edinburgh (1820–1832), and a vice president of the Society of Antiquaries of Scotland (1827–1829). His knowledge of history and literary facility equipped him to establish the historical novel genre as an exemplar of European Romanticism. He became a baronet "of Abbotsford in the County of Roxburgh", Scotland, on 22 April 1820; the title became extinct on his son's death in 1847. Source: Wikipedia (en)