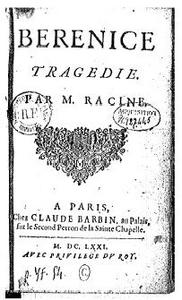 Berenice (French: Bérénice) is a five-act tragedy by the French 17th-century playwright Jean Racine. Berenice was not played often between the 17th and the 20th centuries. Today it is one of Racine's more popular plays, after Phèdre, Andromaque and Britannicus.It was premiered on 21 November 1670 by the Comédiens du Roi at the Hôtel de Bourgogne. Racine seems to have chosen the subject in competition with Pierre Corneille, who was working on his drama Tite et Bérénice at the same time. The subject was taken from the Roman historian Suetonius, who recounts the story of the Roman emperor Titus and Berenice of Cilicia, the sister of Agrippa II. Suetonius wrote a single sentence on the affair: "Titus reginam Berenicen, cui etiam nuptias pollicitus ferebatur, statim ab Urbe dimisit invitus invitam." In his preface, Racine translates this as "Titus, who passionately loved Berenice and who was widely thought to have promised to marry her, sent her from Rome, in spite of himself and in spite of herself, in the early days of his empire."
Read more or edit on Wikipedia