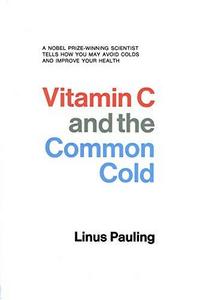 Vitamin C and the Common Cold

Vitamin C and the Common Cold is a popular book by Linus Pauling, first published in 1970, on vitamin C, its interactions with common cold and the role of vitamin C megadosage in human health. The book promoted the idea that taking large amounts of vitamin C could reduce the duration and severity of the common cold. A Nobel Prize-winning chemist and activist, Pauling promoted a view of vitamin C that is strongly at odds with most of the scientific community, which found little evidence for the alleged health benefits of greatly increased vitamin C intake. The book went through multiple editions, and a revised version that discussed the flu and other diseases, retitled Vitamin C, the Common Cold & the Flu, came out in 1976.The book characterizes the inability of humans and some other animals to produce vitamin C in terms of evolution and Pauling's concept of "molecular disease" (first articulated in his 1949 study, "Sickle Cell Anemia, a Molecular Disease"). Pauling argues that the loss of vitamin C synthesis first arose as a molecular disease, because of a genetic mutation that resulted in the loss of the biochemical capacity to make the vitamin, but because diets of the primate ancestors of humans consisted of high levels of vitamin C from plant sources, the loss of that biochemical mechanism was not harmful and may have even been beneficial. He argues, however, that the subsequent shift to a high-meat, lower-plant diet resulted in widespread vitamin C deficiency.
Read more or edit on Wikipedia

Vitamin C, the Common Cold and the Flu