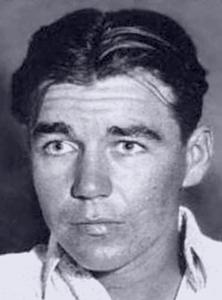 member of the Bonnie and Clyde Barrow Gang

William Daniel ("W.D.", "Bud", "Deacon") Jones (May 12, 1916 – August 20, 1974) was a member of the Barrow Gang, whose spree throughout the southern Midwest in the early years of the Great Depression became part of American criminal folklore. Jones ran with Clyde Barrow and Bonnie Parker for eight and a half months, from Christmas Eve 1932 to early September 1933. He and another gang member named Henry Methvin were consolidated into the "C.W. Moss" character in the film Bonnie and Clyde (1967). "Moss was a dumb kid who run errands and done what Clyde told him," Jones later said. "That was me, all right."
Read more or edit on Wikipedia