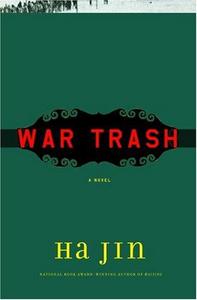 War Trash is a novel by the Chinese author Ha Jin, who has long lived in the United States and who writes in English. It takes the form of a memoir written by the fictional character Yu Yuan, a man who eventually becomes a soldier in the Chinese People's Volunteer Army and who is sent to Korea to fight on the Communist side in the Korean War. The majority of the "memoir" is devoted to describing this experience, especially after Yu Yuan is captured by United Nations forces and imprisoned as a POW. The novel captured the PEN/Faulkner Award and was a finalist for the Pulitzer Prize.
Read more or edit on Wikipedia