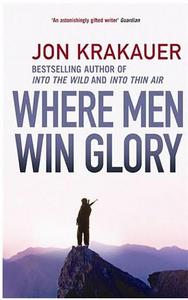 Where Men Win Glory: The Odyssey of Pat Tillman

Where Men Win Glory: The Odyssey of Pat Tillman, a 2009 book written by Jon Krakauer, is a biography of Pat Tillman, an American football player who left his professional career and enlisted in the United States Army after the September 11 attacks. He subsequently was killed in 2004 in the US war in Afghanistan by friendly fire, an incident which the US government attempted to cover up. To write the book, Krakauer drew heavily upon Tillman's journals, interviews with the Tillman family, Boots On the Ground by Dusk: My Tribute to Pat Tillman by Mary Tillman, and extensive research on the ground in Afghanistan.
Read more or edit on Wikipedia