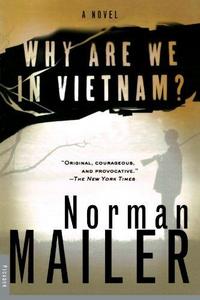 Why Are We in Vietnam?

Why Are We In Vietnam? (WWVN) is a 1967 novel by the American author Norman Mailer. It focuses on a hunting trip to the Brooks Range in Alaska where a young man is brought by his father, a wealthy businessman who works for a company that makes cigarette filters and is obsessed with killing a grizzly bear. As the novel progresses, the protagonist is increasingly disillusioned that his father resorts to hunting tactics that seem dishonest and weak, including the use of a helicopter and taking credit for killing a bear. At the end of the novel, the protagonist tells the reader that he is soon going to serve in the Vietnam War as a soldier. WWVN contains vivid descriptions of Alaska; polarizing, obscene, and stream-of-consciousness narration; and shifting points of view. Mailer uses the narrative to implicitly answer the question the novel's title asks: it demonstrates the attitudes and actions of America that landed it in Vietnam. Its experimental style alienated many readers, but earned the novel a nomination for the National Book Award.
Read more or edit on Wikipedia

original title: Why Are We in Vietnam?
language: English
date of publication: 1967
follows: An American Dream
followed by: The Armies of the Night