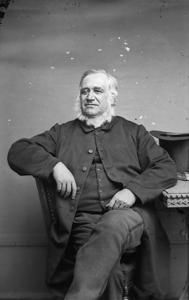 William Rees (8 November 1802 – 8 November 1883), usually known in Wales by his bardic name of Gwilym Hiraethog, was a Welsh poet and author, one of the major figures of Welsh literature during the 19th century. Gwilym Hiraethog took his pseudonym from his birthplace, a farm on the Hiraethog mountain in Denbighshire. Largely self-educated, he was a polymath, who took an interest in astronomy and political science as well as being a Nonconformist minister and a leading literary figure. In 1843 he founded the Welsh language journal Yr Amserau ("The Times") in Liverpool. He used the newspaper to campaign for the disestablishment of the Church in Wales. Rees also penned the hymn text of Dyma gariad fel y moroedd (Here is love, vast as the ocean), which was first published in 1847 but strongly associated with the 1904-1905 Welsh revival. His Helyntion Bywyd Hen Deiliwr (Predicaments of an Old Tailor) (1877) was a pioneering attempt to fashion a Welsh-language novel.
Read more or edit on Wikipedia