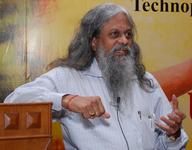 Yagnaswami Sundara Rajan or Y. S. Rajan (born 10 April 1943) is an Indian professor, scientist and administrator. He is Honorary Distinguished Professor in Indian Space Research Organisation. He has made major contributions to various aspects of management of science, technology and innovation. In 2012, he was awarded with Padma Shri for his contributions in science and engineering. He is one of the well known scientists who has closely worked with Abdul Kalam, former President of India. Source: Wikipedia (en)