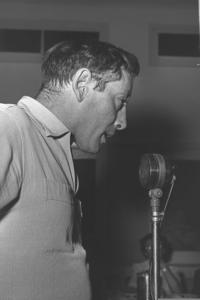 Yigal Mossinson (alternate spellings include Igal Mossinsohn and Yigal Mosenzon) (25 December 1917 – 1 May 1994) was an Israeli novelist, playwright, and inventor. He was the author of the Hasamba children's book series.Among his many awards was the David's Violin Prize for Casablan, the 1954 play upon which the Israeli musical comedy stage and screen hit Kazablan was based.
Read more or edit on Wikipedia