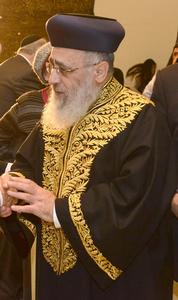 Yitzhak Yosef (Hebrew: יצחק יוסף‎, born January 16, 1952) is the Sephardi Chief Rabbi of Israel (known as the Rishon LeZion), the rosh yeshiva of Yeshivat Hazon Ovadia, and the author of a set of books on halakha (Jewish law) called Yalkut Yosef.Yosef is the son of Ovadia Yosef, former Chief Rabbi of Israel, and bases his halakhic rulings on his father's methodology. His books are considered foundational among large sectors of Sephardic Jews in Israel and the world. For these books, he has won the Rabbi Toledano Prize from the Tel Aviv Religious Council, as well as the Rav Kook Prize.
Read more or edit on Wikipedia