The Han Solo Adventures is a trilogy of novels set in the Star Wars fictional universe by American science-fiction novelist Brian Daley. It follows the smuggling days of Han Solo and Chewbacca ten years before the events of the original Star Wars film. The books were released in 1979–1980, making them the first non-movie Star Wars books published, except for Splinter of the Mind's Eye (1978). They were also the last published until The Adventures of Lando Calrissian trilogy in 1983; both trilogies were originally published by Del Rey, a division of Ballantine Books. The three Han Solo books were also published as an omnibus edition in 1992. The events of the series are incorporated into the Star Wars Expanded Universe by being contextualized in interludes in Rebel Dawn (1998), the final book of Ann C. Crispin's Han Solo Trilogy.
Read more or edit on Wikipedia

Han Solo and the Lost Legacy 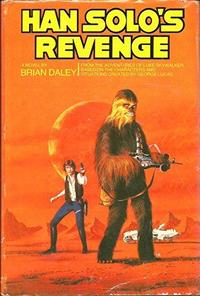