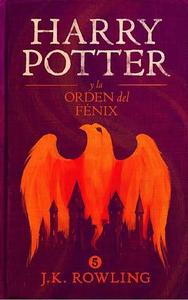 Harry Potter and the Order of the Phoenix

Harry Potter and the Order of the Phoenix is a fantasy novel written by British author J. K. Rowling and the fifth novel in the Harry Potter series. It follows Harry Potter's struggles through his fifth year at Hogwarts School of Witchcraft and Wizardry, including the surreptitious return of the antagonist Lord Voldemort, O.W.L. exams, and an obstructive Ministry of Magic. The novel was published on 21 June 2003 by Bloomsbury in the United Kingdom, Scholastic in the United States, and Raincoast in Canada. It sold five million copies in the first 24 hours of publication. It is the longest book of the series. Harry Potter and the Order of the Phoenix won several awards, including the American Library Association Best Book Award for Young Adults in 2003. The book was also made into a 2007 film and a video game by Electronic Arts.
Read more or edit on Wikipedia