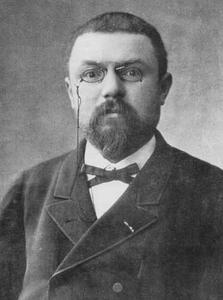 Jules Henri Poincaré (UK: [US: stress final syllable], French: [ɑ̃ʁi pwɛ̃kaʁe] (listen); 29 April 1854 – 17 July 1912) was a French mathematician, theoretical physicist, engineer, and philosopher of science. He is often described as a polymath, and in mathematics as "The Last Universalist", since he excelled in all fields of the discipline as it existed during his lifetime. As a mathematician and physicist, he made many original fundamental contributions to pure and applied mathematics, mathematical physics, and celestial mechanics. In his research on the three-body problem, Poincaré became the first person to discover a chaotic deterministic system which laid the foundations of modern chaos theory. He is also considered to be one of the founders of the field of topology. Poincaré made clear the importance of paying attention to the invariance of laws of physics under different transformations, and was the first to present the Lorentz transformations in their modern symmetrical form. Poincaré discovered the remaining relativistic velocity transformations and recorded them in a letter to Hendrik Lorentz in 1905. Thus he obtained perfect invariance of all of Maxwell's equations, an important step in the formulation of the theory of special relativity. In 1905, Poincaré first proposed gravitational waves (ondes gravifiques) emanating from a body and propagating at the speed of light as being required by the Lorentz transformations. The Poincaré group used in physics and mathematics was named after him. Early in the 20th century he formulated the Poincaré conjecture that became over time one of the famous unsolved problems in mathematics until it was solved in 2002–2003 by Grigori Perelman.
Read more or edit on Wikipedia