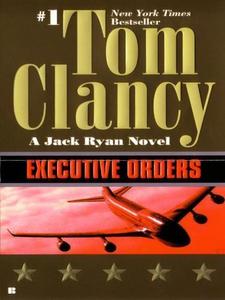 Executive Orders is a techno-thriller novel, written by Tom Clancy and released on July 1, 1996. It picks up immediately where the final events of Debt of Honor (1994) left off, and features now-U.S. President Jack Ryan as he tries to deal with foreign and domestic threats. The book is dedicated to former U.S. President Ronald Reagan, who had been responsible for Clancy's worldwide success as a novelist. The book debuted at number one on the New York Times bestseller list.
Read more or edit on Wikipedia