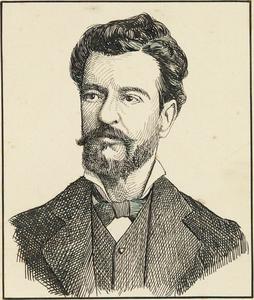 Bernardo Joaquim da Silva Guimarães (Portuguese pronunciation: [beʁˈnaʁdu ɡimaˈɾɐ̃jʃ]; August 15, 1825 – March 10, 1884) was a Brazilian poet and novelist. He is the author of the famous romances A Escrava Isaura and O Seminarista. He also introduced to Brazilian poetry the verso bestialógico (Portuguese: [ˈvɛɾsu beʃtʃjaˈlɔʒiku], roughly silly verse), also referred to as pantagruélico (in a reference to Rabelais's character Pantagruel) — poems whose verses are very nonsensical, although very metrical. Under the verso bestialógico, he wrote polemical erotic verses, such as "O Elixir do Pajé" (The Witchdoctor's Elixir) and "A Origem do Mênstruo" (The Origin of Menstruation). A non-erotic poem written in verso bestialógico is "Eu Vi dos Polos o Gigante Alado" (From the Poles I Saw the Winged Giant). He is patron of the fifth chair of the Brazilian Academy of Letters.
Read more or edit on Wikipedia