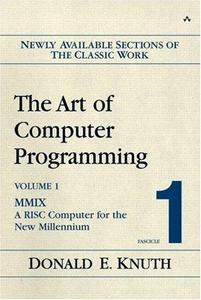 The Art of Computer Programming

The Art of Computer Programming (TAOCP) is a comprehensive monograph written by computer scientist Donald Knuth that covers many kinds of programming algorithms and their analysis. Knuth began the project, originally conceived as a single book with twelve chapters, in 1962. The first three volumes of what was then expected to be a seven-volume set were published in 1968, 1969, and 1973. Work began in earnest on Volume 4 in 1973, but was suspended in 1977 for work on typesetting. Writing of the final copy of Volume 4A began in longhand in 2001, and the first online pre-fascicle, 2A, appeared later in 2001. The first published installment of Volume 4 appeared in paperback as Fascicle 2 in 2005. The hardback Volume 4A, combining Volume 4, Fascicles 0–4, was published in 2011. Volume 4, Fascicle 6 ("Satisfiability") was released in December 2015; Volume 4, Fascicle 5 ("Mathematical Preliminaries Redux; Backtracking; Dancing Links") was released in November 2019. Fascicles 5 and 6 are expected to comprise the first two-thirds of Volume 4B. Knuth has not announced any estimated date for release of Volume 4B, although his method used for Volume 4A is to release the hardback volume sometime after release of the paperback fascicles that comprise it. Near-term publisher estimates put the release date at May or June of 2019, which proved to be incorrect.
Read more or edit on Wikipedia