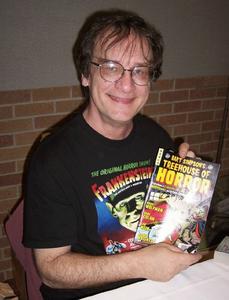 Bernard Albert Wrightson (October 27, 1948 – March 18, 2017), sometimes credited as Bernie Wrightson, was an American artist, known for co-creating the Swamp Thing, his adaptation of the novel Frankenstein illustration work, and for his other horror comics and illustrations, which feature his trademark intricate pen and brushwork.
Read more or edit on Wikipedia