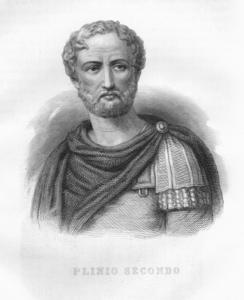 Gaius Plinius Secundus (AD 23/24 – 79), called Pliny the Elder , was a Roman author, naturalist and natural philosopher, and naval and army commander of the early Roman Empire, and a friend of the emperor Vespasian. He wrote the encyclopedic Naturalis Historia (Natural History), which became an editorial model for encyclopedias. He spent most of his spare time studying, writing, and investigating natural and geographic phenomena in the field. His nephew, Pliny the Younger, wrote of him in a letter to the historian Tacitus: For my part I deem those blessed to whom, by favour of the gods, it has been granted either to do what is worth writing of, or to write what is worth reading; above measure blessed are those on whom both gifts have been conferred. In the latter number will be my uncle, by virtue of his own and of your compositions. Among Pliny's greatest works was the twenty-volume work, Bella Germaniae ("The History of the German Wars"), which is no longer extant. Bella Germaniae, which began where Aufidius Bassus' Libri Belli Germanici ("The War with the Germans") left off, was used as a source by other prominent Roman historians, including Plutarch, Tacitus and Suetonius. Tacitus – who many scholars agree had never travelled in Germania – used Bella Germaniae as the primary source for his work, De origine et situ Germanorum ("On the Origin and Situation of the Germans").Pliny the Elder died in AD 79 in Stabiae while attempting the rescue of a friend and his family by ship from the eruption of Mount Vesuvius, which had already destroyed the cities of Pompeii and Herculaneum. The wind caused by the sixth and largest pyroclastic surge of the volcano's eruption did not allow his ship to leave port, and Pliny died during that event.
Read more or edit on Wikipedia