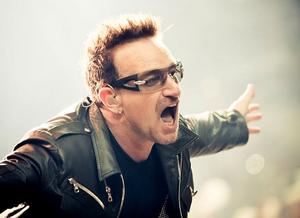 Irish rock musician, singer of U2

Paul David Hewson KBE (born 10 May 1960), known by his stage name Bono , is an Irish singer-songwriter, activist, philanthropist, and businessman. He is the lead vocalist and primary lyricist of rock band U2. Born and raised in Dublin, Ireland, he attended Mount Temple Comprehensive School where he met his future wife, Alison Stewart, as well as schoolmates with whom he formed U2 in 1976. Bono soon established himself as a passionate frontman for the band through his expressive vocal style and grandiose gestures and songwriting. His lyrics frequently include social and political themes, and religious imagery inspired by his Christian beliefs. During U2's early years, Bono's lyrics contributed to the group's rebellious and spiritual tone. As the band matured, his lyrics became inspired more by personal experiences shared with the other members. As a member of U2, Bono has received 22 Grammy Awards and has been inducted into the Rock and Roll Hall of Fame. Aside from his music, Bono is an activist for social justice causes, both through U2 and as an individual. He is particularly active in campaigning for Africa, for which he co-founded DATA, EDUN, the ONE Campaign, and Product Red. In pursuit of these causes, he has participated in benefit concerts and lobbied politicians and heads of state for relief. Bono has been honoured for his philanthropic efforts. In 2005, Bono was named one of the Time Persons of the Year. He was granted an honorary knighthood by Elizabeth II of the United Kingdom in 2007 for "his services to the music industry and for his humanitarian work", and was made a Commandeur of the French Ordre des Arts et des Lettres (Order of Arts and Letters) in 2013. Bono has also attracted criticism for bypassing African businesses in his activist efforts and for tax avoidance in his personal finances. Outside the band, he has recorded with numerous artists. He has collaborated with U2 bandmate the Edge on several projects, including songs for Roy Orbison and Tina Turner and the soundtracks to the musical Spider-Man: Turn Off the Dark and a London stage adaptation of A Clockwork Orange. In business, he invested in the refurbishment of the Clarence Hotel in Dublin, and was managing director and a managing partner of the private equity firm Elevation Partners, which invested in several companies.
Read more or edit on Wikipedia