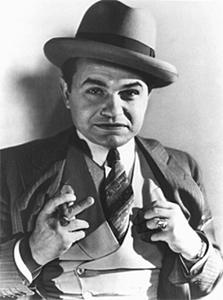 Edward G. Robinson (born Emanuel Goldenberg; Yiddish: עמנואל גאָלדנבערג; December 12, 1893 – January 26, 1973) was a Romanian-born American actor of stage and screen during Hollywood's Golden Age. He appeared in 30 Broadway plays and more than 100 films during a 50-year career and is best remembered for his tough-guy roles as gangsters in such films as Little Caesar and Key Largo. He played the claims adjuster Barton Keyes in the 1944 Film noir classic Double Indemnity. During his career Robinson had won the Cannes Film Festival Award for Best Actor for his performance in House of Strangers. During the 1930s and 1940s, he was an outspoken public critic of fascism and Nazism, which were growing in strength in Europe in the years which led up to World War II. His activism included contributing over $250,000 to more than 850 organizations which were involved in war relief, along with contributions to cultural, educational and religious groups. During the 1950s, he was called to testify in front of the House Un-American Activities Committee during the Red Scare, but he was cleared of any deliberate Communist involvement when he claimed that he was "duped" by several people whom he named (including screenwriter Dalton Trumbo, according to the official Congressional record, "Communist infiltration of the Hollywood motion-picture industry"). As a result of being investigated, he found himself on Hollywood’s graylist, people who were on the Hollywood blacklist maintained by the major studios, but could find work at minor film studios on what was called Poverty Row. Robinson's roles included an insurance investigator in the film noir Double Indemnity, Dathan (the adversary of Moses) in The Ten Commandments, and his final performance in the science-fiction story Soylent Green. Robinson received an Academy Honorary Award for his work in the film industry, which was awarded two months after he died in 1973. He is ranked number 24 in the American Film Institute's list of the 25 greatest male stars of Classic American cinema.
Read more or edit on Wikipedia