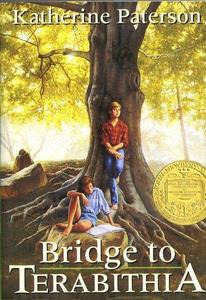 Bridge to Terabithia is a novel written by Katherine Paterson, about two children named Leslie and Jesse who create a magical forest kingdom in their imaginations. The book was originally published in 1977 by Thomas Crowell, and in 1978, it won the Newbery Medal. Paterson drew inspiration for the novel from a real event that occurred in August 1974 when her son's friend was struck dead by lightning. The novel tells the story of fifth grader Jesse Aarons, who becomes friends with his new neighbor, Leslie Burke, after he loses a footrace to her at school. Leslie is a tomboy from a wealthy family, and Jesse thinks highly of her. Jesse is an artistic boy from a poorer family who, in the beginning, is fearful and angry. After meeting Leslie, however, his life is transformed. He becomes courageous and learns to let go of his frustration. The two children create a kingdom for themselves, which Leslie names "Terabithia." The novel's content has been the frequent target of censorship and appears at number eight on the American Library Association list of the 100 Most Frequently Challenged Books for the decade 1990–2000.It has been adapted for the screen twice: a 1985 PBS TV movie and a 2007 Disney/Walden Media feature film.
Read more or edit on Wikipedia