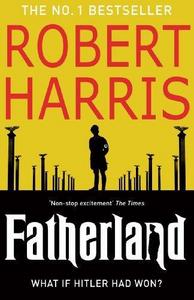 Fatherland is a 1992 alternative history detective novel by English writer and journalist Robert Harris. Set in a universe in which Nazi Germany won World War II, the story's lead protagonist is an officer of the Kripo, the criminal police, who is investigating the murder of a Nazi government official who participated at the Wannsee Conference. A plot is thus discovered to eliminate all of those who attended conference to help the improvement of Germany's relations with the United States. The novel inverts some of the conventions of the detective novel. It begins with a murder and diligent police detective investigating and eventually solving it. However, since the murderer is highly placed in a tyrannical regime, solving the mystery does not result in the detective pursuing and arresting the murderer. The contrary occurs in the novel: the murderer pursuing and arresting the detective. The novel was an immediate best-seller in the UK and has sold over three million copies and been translated into 25 languages.
Read more or edit on Wikipedia