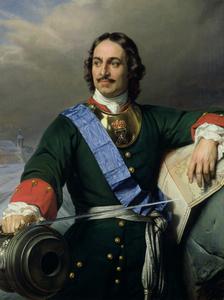 Tsar and 1st Emperor, founder of the Russian Empire

Peter the Great (Russian: Пётр Вели́кий, tr. Pyotr Velíkiy, IPA: [ˈpʲɵtr vʲɪˈlʲikʲɪj]), Peter I (Russian: Пётр Первый, tr. Pyotr Pyervyy, IPA: [ˈpʲɵtr ˈpʲɛrvɨj]) or Pyotr Alekséyevich (Russian: Пётр Алексе́евич, IPA: [ˈpʲɵtr ɐlʲɪˈksʲejɪvʲɪtɕ]; 9 June [O.S. 30 May] 1672 – 8 February [O.S. 28 January] 1725) ruled the Tsardom of Russia and later the Russian Empire from 7 May [O.S. 27 April] 1682 until his death in 1725, jointly ruling before 1696 with his elder half-brother, Ivan V. Through a number of successful wars, he captured ports at Azov and the Baltic Sea, laying the groundwork for the Imperial Russian Navy, ending uncontested Swedish supremacy in the Baltic and beginning the Tsardom's expansion into a much larger empire that became a major European power. He led a cultural revolution that replaced some of the traditionalist and medieval social and political systems with ones that were modern, scientific, Westernised and based on the Enlightenment. Peter's reforms had a lasting impact on Russia, and many institutions of the Russian government trace their origins to his reign. He adopted the title of Emperor in place of the old title of Tsar in 1721, and founded and developed the city of Saint Petersburg, which remained the capital of Russia until 1917. However, the formation of local elites domestically was not his main priority, and the first Russian university was founded only a year before his death, in 1724. The second one was founded 30 years after his death, during the reign of his daughter Elizabeth.
Read more or edit on Wikipedia