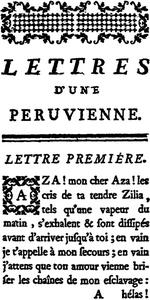 Letters from a Peruvian Woman

Letters from a Peruvian Woman (French: Lettres d'une Péruvienne) is a 1747 epistolary novel by Françoise de Graffigny. It tells the story of Zilia, a young Incan princess, who is abducted from the Temple of the Sun by the Spanish during the Spanish conquest of the Inca Empire. In a series of letters to her fiancé Aza, who is also the Sapa Inca, Zilia tells the story of her capture, her rescue by French sailors, her befriending of the captain Déterville and her introduction to French society. Like Montesquieu's Lettres persanes, Lettres d'une Péruvienne presents a satirical view of French life, particularly the conditions of French women, through the eyes of an outsider. Zilia talks about language, literature, philosophy, education, and child rearing, among other subjects. To a much greater degree than Montesquieu, Françoise de Graffigny engages readers in a suspenseful story, turning on whether Zilia will be reunited with Aza or whether she will consent to marry Déterville. Many readers and critics were unsatisfied by the conclusion, but when the author revised and expanded the novel for a new edition in 1752, she refused to change the ending. The inspiration for the novel came from seeing a performance of Alzire, Voltaire's play set during the Spanish conquest of Peru; immediately afterwards, in May 1743, she began to read the Inca Garcilaso de la Vega's History of the Incas, which supplied most of the historical background for the story. Although only a small fragment of a manuscript exists, the process of composition can be followed in the author's correspondence.The novel was an immediate success with readers; by the end of 1748 there were fourteen editions, including three of an English translation. Over the next hundred years, more than 140 editions appeared, including the revised and expanded 1752 edition, several different English translations, two in Italian, and others in German, Portuguese, Russian, Spanish, and Swedish. Contemporary critics, including Pierre Clément, Élie Catherine Fréron, Joseph de La Porte, and Guillaume Thomas François Raynal, wrote long and mostly favorable reviews. Several articles in Diderot's Encyclopédie quote the novel. A number of sequels were written, often to "improve" on the author's dénouement; the most famous was Lettres d'Aza, by Ignace Hugary de Lamarche-Courmont, published in 1748 and frequently reprinted with the original novel.The popularity of Lettres d'une Péruvienne faded after 1830, but it enjoyed a strong revival of interest in the last third of the twentieth century, thanks in part to new scholarship and in part to the new interest in women writers generated by the feminist movement.
Read more or edit on Wikipedia