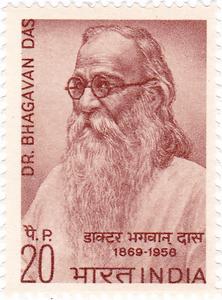 Bhagwan Das (12 January 1869 – 18 September 1958) was an Indian Theosophist and public figure. For a time he served in the Central Legislative Assembly of British India. He became allied with the Hindustani Culture Society and was active in opposing rioting as a form of protest. As an advocate for national freedom from the British rule, he was often in danger of reprisals from the Colonial government. He was awarded the Bharat Ratna in 1955.
Read more or edit on Wikipedia