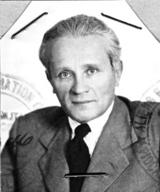 Otto Katz (27 May 1895 in Jistebnice – 3 December 1952 in Prague, also known as André Simone amongst other aliases, was a Czech agent. He was one of the most influential agents of the Soviet Union under Stalin in Western intellectual and artistic circles during the 1930s and 1940s. He was hanged after he was convicted in the Slánský trial. Known for his many pseudonyms, his seductiveness, his cynicism and versatility, from Paris to Hollywood from Mexico City to London, he participated in all the major Comintern disinformation campaigns in the 1930s, under the leadership of Willi Münzenberg who he eventually usurped after spying on him for the NKVD, if the rumours were to be believed.He became an international spy unconditionally faithful to Stalin, and unlike some of the communist Jewish intellectuals who ran the Comintern at the time, he accepted the German-Soviet Pact and was entrusted with the implementation of secret policies by Stalin's politburo. He was strongly suspected, without conclusive evidence, of involvement as Ramon Mercader's handler in the assassination of Leon Trotsky, and in the supposed murder of Willi Münzenberg who was found hanged in a French forest. Various purges, liquidations and murders required by Stalin during the Spanish Civil War are also attributed to him. Source: Wikipedia (en)