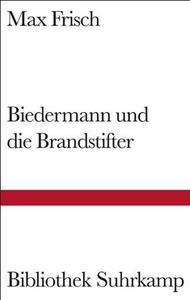 The Arsonists (German: Biedermann und die Brandstifter), previously also known in English as The Firebugs or The Fire Raisers, was written by Max Frisch in 1953, first as a radio play, then adapted for television and the stage (1958) as a play in six scenes. It was revised in 1960 to include an epilogue.
Read more or edit on Wikipedia