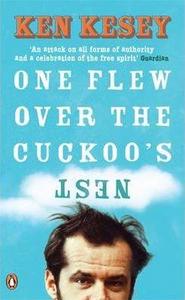 One Flew Over the Cuckoo's Nest

One Flew Over the Cuckoo's Nest (1962) is a novel written by Ken Kesey. Set in an Oregon psychiatric hospital, the narrative serves as a study of institutional processes and the human mind as well as a critique of behaviorism and a tribute to individualistic principles. It was adapted into the Broadway (and later off-Broadway) play One Flew Over the Cuckoo's Nest by Dale Wasserman in 1963. Bo Goldman adapted the novel into a 1975 film directed by Miloš Forman, which won five Academy Awards. Time magazine included the novel in its "100 Best English-language Novels from 1923 to 2005" list. In 2003 the book was listed on the BBC's The Big Read poll of the UK's 200 "best-loved novels."
Read more or edit on Wikipedia