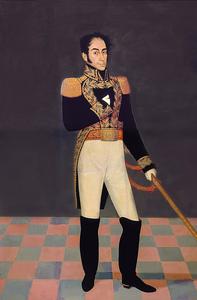 Venezuelan military and political leader, protagonist of the Spanish-American emancipation against the Spanish Empire (1783-1830)

Simón José Antonio de la Santísima Trinidad Bolívar y Ponte Palacios y Blanco (24 July 1783 – 17 December 1830) (Spanish: [siˈmom boˈliβaɾ] (listen), English: BOL-iv-ər, -⁠ar also US: BOH-liv-ar), also colloquially as El Libertador, or Liberator of America was a Venezuelan military and political leader who led what are currently the countries of Venezuela, Bolivia, Colombia, Ecuador, Peru, and Panama to independence from the Spanish Empire. Bolívar was born in Caracas (Venezuela) into a wealthy family and as was common for the heirs of upper-class families in his day, was sent to be educated abroad at a young age, arriving in Spain when he was 16 and later moving to France. While in Europe he was introduced to the ideas of the Enlightenment, which later motivated him to overthrow the reigning Spanish in colonial South America. Taking advantage of the disorder in Spain prompted by the Peninsular War, Bolívar began his campaign for independence in 1808. The campaign for the independence of New Granada was consolidated with the victory at the Battle of Boyacá on 7 August 1819. He established an organized national congress within three years. Despite a number of hindrances, including the arrival of an unprecedentedly large Spanish expeditionary force, the revolutionaries eventually prevailed, culminating in the victory at the Battle of Carabobo in 1821, which effectively made Venezuela an independent country. Following this triumph over the Spanish monarchy, Bolívar participated in the foundation of the first union of independent nations in Latin America, Gran Colombia, of which he was president from 1819 to 1830. Through further military campaigns, he ousted Spanish rulers from Ecuador, Peru, and Bolivia, the last of which was named after him. He was simultaneously president of Gran Colombia (present-day Venezuela, Colombia, Panama and Ecuador), Peru, and Bolivia, but soon after, his second-in-command, Antonio José de Sucre, was appointed president of Bolivia. Bolívar aimed at a strong and united Spanish America able to cope not only with the threats emanating from Spain and the European Holy Alliance but also with the emerging power of the United States. At the peak of his power, Bolívar ruled over a vast territory from the Argentine border to the Caribbean Sea. Bolívar is viewed as a national icon in much of modern South America, and is considered one of the great heroes of the Hispanic independence movements of the early 19th century, along with José de San Martín, Francisco de Miranda and others. Towards the end of his life, Bolívar despaired of the situation in his native region, with the famous quote "all who served the revolution have plowed the sea". In an address to the Constituent Congress of the Republic of Colombia, Bolívar stated "Fellow citizens! I blush to say this: Independence is the only benefit we have acquired, to the detriment of all the rest."
Read more or edit on Wikipedia

will of Simón Bolívar