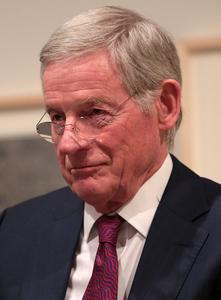 Harvey Claflin Mansfield Jr. (born March 21, 1932) is an American political philosopher. He is the William R. Kenan, Jr. Professor of Government at Harvard University, where he has taught since 1962. He has held Guggenheim and NEH Fellowships and has been a Fellow at the National Humanities Center; he also received the National Humanities Medal in 2004 and delivered the Jefferson Lecture in 2007. He is a Carol G. Simon Senior Fellow at Stanford University's Hoover Institution. He is notable for his generally conservative stance on political issues in his writings. Mansfield is the author and co-translator of studies of and/or by major political philosophers such as Aristotle, Edmund Burke, Niccolò Machiavelli, Alexis de Tocqueville, and Thomas Hobbes, of Constitutional government, and of Manliness (2006). In interviews Mansfield has acknowledged the work of Leo Strauss as the key modern influence on his own political philosophy.Among his most notable former students include: Charles R. Kesler, Mark Blitz, Tom Cotton, Andrew Sullivan, Alan Keyes, William Kristol, Clifford Orwin, Paul Cantor, Delba Winthrop, Mark Lilla, Francis Fukuyama, Sharon Krause, Bruno Maçães, and Shen Tong.
Read more or edit on Wikipedia